Planning our next visit to NZ..its getting nearer and nearer and my head is in a panic about how we'll afford it.
Pirate reckons that this will be his last visit, being 80 next year.   I say "never say never"...but I can see his point ,it is one heck of a journey.
Our usual 'digs' wont be available, friends are downsizing...others are not well...lets say we'll be living exceedingly frugally!!

The full preserve jars are stacking up..shelves are being built...not easy on a flimsily built house with limited space. I'd like to get back to more bottling ("canning") next year instead of freezing.
I've bottled and processed one batch of fresh apple juice to see if that works. I'll have to stick with freezing in plastic bottles for now until I'm sure, but I want to get away from plastic and from worrying about power cuts and wasted food.

The next vege beds in the garden are planned and staked out, but Pirate says no work on those until the kiln is ready!   I've designed them so that I can put a mesh polytunnel over them..I know, that's plastic..but with the kids next door I'm not risking glass!!

We've been given some unused surplus engineering bricks and a few breeze blocks.  These are from a garden we cut grass and tidy. The owners will be moving in a year, have already sold, and are tidying the property slowly before handover.    We'll be sad to see them go,they are good friends...and also we work on their garden in exchange for specs...they are opticians!

The bricks and blocks will support the new  kiln flue. I have HTI ( High Temperature Insulation) bricks to build the flue that will go horizontally from the rear of the kiln to outside the shed wall. Then it will be metal flue from there up,which I also have.
After building that it will be down to mending the bricks that were damaged when the kiln fell on its side during the last move, and working out how to prop up the subsiding arch.

I haven't got my head around any of my printing work for months.  Head space is limited!! It is giving me that itchy feeling of should be -
Posted by gz at 18:54 6 comments:

We had news yesterday of the death of Derek Smith..gentleman,cyclist,photographer... 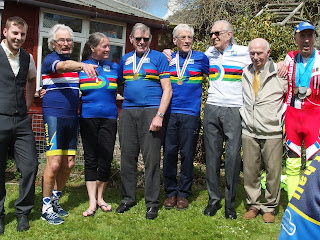 There at our wedding in his white (senior,not masters) world championship jersey.

Here, when only 75 in a Look North tv interview.

He'll be fondly remembered and well missed.
Posted by gz at 10:10 4 comments:

It amazes me how much fruit is around..even the birds and animals don't eat it all, so I'm not depriving them.

Time and busyness and travelling meant I missed most of a wonderful blackberry harvest. The cold winds, rain and now frost have dealt with the masses of fruit left,leaving it soggy or shrivelled.

However, the weather has brought on a lovely crop of sloes and hawthorn berries. The only fruit I haven't picked so far are rosehips.  I'm hoping to find some Rosa Rugosa hips..nice and big, so less work processing them!
Posted by gz at 09:46 3 comments:

I now have the same website,same address, but hosted differently...and I need to learn all the wordpress tools to update and post in it!

We're hunkered down now, 40mph plus winds and higher in a couple of hours.
The wind is whistling through the smallest of gaps and rumbling around the chimney.
Luckily we are at 400 foot above sea level, as with onshore storm winds , a flood warning has been issued for coastal areas in Ayrshire and Arran. Mind you, at 400 foot with a clear view to the Clyde we're facing the full force of the wind. Even things that we thought were well weighted down are moving.

Mango chutney made (surprising how small the yield compared to jam!) and wallpaper in the kitchen coming off...
Where I painted it in April, the paint is still sticky..even on bare plaster it has only just dried....moral....avoid cheap paint!    I have lining paper and wallpaper in house and Pirate will put up two more shelves  above the kitchen radiator after papering. A good use of the offcuts from the cupboard shelves!
To get the right length for the cupboard shelves we had to buy 2.1 metre lengths...which just fit diagonally in the back of our Berlingo car...with the larger set of rear seats out!
The cupboard shelves are nearly done..a little filler in the wall, moulding on the front of the shelf made of plywood and painting...

All for the aim of a tidy kitchen with a clear bench and produce and utensils in the cupboards.
I'll be glad when half the kitchen contents are back in the kitchen from the living room.
It will be a good chance to reduce them as well!
Posted by gz at 12:06 5 comments:

Easing..or rather rushing...from Summer to Autumn hasn't been easy.
We had a lovely warm two weeks away, but returning to the cold and wet has been hard going!!

I've been working through the bags of fruit..12 jars each of damson, and damson and apple jam. Four pounds of damsons in the freezer and another four pounds in the fridge.
Sorting through the pears, many are well bruised (after dropping from 20 to 30 feet...) have hard lumps in them and what looks like codling moth damage.
Two trays of pear slices in the dryer with two of apple rings,and a bowl of pear bits in water and lemon juice for a pudding tonight.
I'm hunting for a fresh fig and date chutney recipe....
Plenty more apples to be sliced for drying and juiced for freezing. I might try one batch of cider....

Pirate is fitting shelves in our kitchen cupboard...not the easiest of jobs as its 134 centimetres long.. and is at its widest 40 centimetres....and has an ordinary door to access it in the middle!
Much banging and a modicum of swearing...and stops for tea and toast with vegemite!!
It will mean the kitchen bench will be (fairly!) uncluttered and the preserves and cordials can be stored in the kitchen cupboards instead of the living room sideboard.

We've had one half-day garden job...paid in kind...overnight stay, supper, breakfast and lunch and a bottle of Rioja wine!  Four others are waiting for the grass to dry (some hope!) but that does mean things are getting done here.   I'm planning on moving the fruit bushes from their pots into the present deep beds, and starting on new beds for veges...so they need to be ready for the autumn planting of garlic,onion sets and broad beans.

I've had weird computer problems since updating the linux/ubuntu operating system...some have been solved by changing from firefox to chromium browser...but then have disappeared! I'll keep firefox as a backup in case of more problems.  However it sits on the "front page" for five minutes before flashing through a problems report page so fast that you can't read it...the general consensus is that something is interfering with plymouth, the front page programme...a plug-in or some such that didn't get deleted during the system upgrade... I have access to people with knowledge of linux, but not in person here!

Everything is eating into our Travelling to NZ cash..getting wed, keeping the car on the road, possibly getting a new laptop (or tablet).....all sorts...but we are determined..Pirate is 80 next year and reckons that this will, sadly, be his last trip to the other side of the globe.

So we are back into a sort of routine, ticking along, trying to keep warm and fit.

Whilst away I caught up with a potter friend...and now I know how to get the flue on the kiln!!...Now I need some breeze blocks to start the job....
Posted by gz at 18:06 4 comments:

I haven't taken many photos on this trip..and when I did I found that I hadn't brought the right lead to get them on here.

The tour has continued, to Yeovil for one short night...too short...but we'll return.
The road to Bristol led through Street. There we found a very interesting cider barn thanks to the potter I caught up with.
It was a worthwhile visit.
Much kiln advice, perry bought and his verdict on the Pirate ? "He's a good 'un"

On to Bristol for a couple of days of dog walking with more family, on to Warwickshire for yet more.
At least today we've had a gentle ride around the lanes between Henley in Arden and Alcester,before tomorrow's journey back to Scotland.
Posted by gz at 15:56 5 comments:

Saw friends in Epsom, staying with rellies in Kent...now for foraging damsons and a bike ride on flat roads...before we head off west....pictures will wait!
Posted by gz at 10:16 5 comments: