Heavy rain, hailstorms, and a massive rainbow on the way to the kiln opening!

Steadily unbricking the wicket, with the inner hard bricks as warm as toast, keeping our hands warm in the cold and damp....

To see a kiln full of cracking good pots!!! 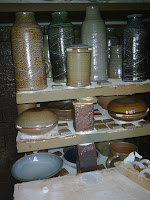 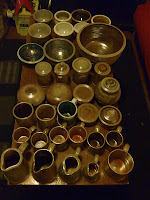 The Carpenter and The Mechanic (The Oily One's friend) are sorting my workshop today!!!

I am keeping a low profile and providing refreshments :-)

Meanwhile, the rain pours down.
Posted by gz at 11:39 No comments:

Where are you, Mouse?

Your blog has disappeared 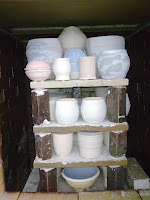 The kiln was packed a week ago, and fired on low to dry out for four hours last night.

This morning I rose at 5am, to start the bread for lunch, whilst in Abergavenny at nearly 6.30 am the kiln was re-lit for the firing in earnest.

As forecast the rain came back before lunchtime, and as forecast it eased in the afternoon ready for the salting of the kiln.
This happens every ten minutes for two hours, when a large serving spoonful of damp salt is put into the fireboxes through two spyholes each side. The salt vapourizes and reacts with the pots to form a glaze.

We tried different burners this time, using the gas at a lower pressure....and it fired better, quicker, more controlledly and also.....cheaper!!
This also meant that after a twelve hour firing we had supper and could relax, instead of firing into the late night or early morning.

Going for a walk 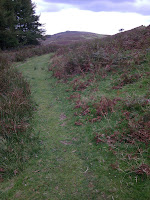 The gardens were damp and uninspiring after all the rain, but the weather held good on Friday. 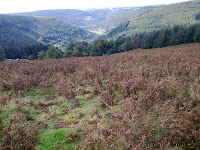 We took the chance and went for a little two hour walk! We judged right, from the wind direction, and found most of the ponies 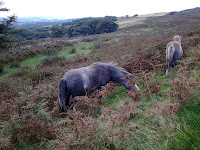 Yet more wind and rain, but at least today the washing got half-dry on the line between showers!

Mountain Man still has a cold and a runny nose, but as he has to keep going out in the cold and wet, it will take longer to get him well again.

My mobile phone deal means that I pay nothing for calls to him...talking is better than nothing.
It is no substitute for a hug, or a walk together.

Today I tidied even more!! Now I have a bagful of papers to recycle, a tidy stamps box for making impressions on pots and a lot more waiting to be fettled and fired.

We still don't know where the ponies are. They will be sheltering in the edge of the forestry where they can keep out of the wind and find forage. This makes them even more difficult to see!!
Posted by gz at 17:41 3 comments:

We managed to nearly half pack the kiln on Friday, but failing light and increasing rain put paid to any further progress.

I travelled home as the light faded and the rain increased, and turned to go over the NorthEast end of the mountain to avoid the traffic. There by the sheepfold was the grey mare and her grey daughter and granddaughter...they looked well, if very wet!
So where are the other twenty three!!

We should have finished kiln packing today, but the weather has ruled that out.
Gales and heavy rain have kept us at home.

The bowls I threw on monday had dried well, so turned and cut beautifully.
It is not too late to rewrap one and make it into a colander....

I could do with a working kiln to keep the workshop warm and dry!!

More rain and gales tonight. I hope everything is still in the garden!!
Posted by gz at 20:16 2 comments:

There will be no gardening today, the weather is cold,wet and foggy on the mountains.

On the mountain itself it is raining.

So today I am making more pots- cream jugs and bud vases, perhaps some soup bowls.

It is disconcerting , however, when one washes one's hands after a throwing session, and the water from the cold tap feels warmer than one's hands.....
Posted by gz at 13:32 No comments:

It has been foggy and chill today, when gardening was good for a half hour warmup.

We went to one corner of the mountain in case the ponies were there but no sign. They will be sheltering somewhere out of the wind.

So home after lunch on the mountain and out to the workshop, weighing and balling up clay.

Then starting to throw and a dozen small coffee cups came easily-what a relief!!

As I finished the last one, the solar powered garden lights outside the workshop window flickered on-definitely time to finish for today.

Now I am reluctant to take my overalls off- I am nice and cosy in them and it is beginning to freeze outside!!
Posted by gz at 19:06 No comments:

Today I went to market- the Farmers' Market in Usk.

I sold enough to cover some costs of setting up, and had a lot of interest.

I'll be back next month!!

I had my own fire....I baked bread. The house is clean and tidy. (well. tidier!)

Then Nature is having her cleanout too, with strong winds and heavy rain
Posted by gz at 12:24 1 comment:

The weather was good, the housework done, so Mountain Man and myself went to the first Pony and Horse sale in Talgarth Market for between thirty and forty years.

Many were there just to see how it went. Others catching up on old friends.

Some ponies were being sold for" pocket money" prices, nothing compared to the cost of transport, entering into the sale, passports and microchips.....

Quite a few did not reach a decent price and were withdrawn.

However it looks as if this is back on the calendar, so there are hopes for better deals next time, and an upturn in the market.

The car, having had a general service and a brake service decided to pop a small clip, leaving us with half throttle a mile from Talgarth.....

It was mended with the Farmer's Friend....six inches of binder twine!! It did the job and got us home well
Posted by gz at 12:04 No comments: