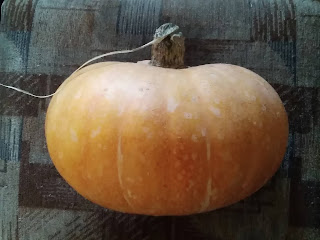 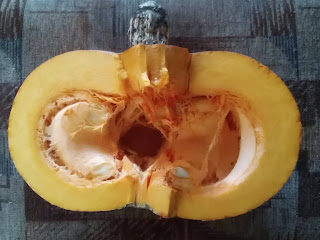 Halfway through the first big one, of two.

The stalk had begun to rot, so better use it than lose it. The other is ok so far.

I have one small pumpkin, still looking good. Of the three small butternut squash, one half rotted, so I used the other half in a batch of soup.

Now is the time to plan where they get to grow next year!

Getting a walk in

We had a parcel to post, so went into Ayr on the bus. I needed a rest from driving! It was far too cold to go on the bike and also damp, so I didn't want the risk of sliding off the bike.

Pirate bought me a new pair of lightweight walking shoes too, as my old ones literally fell apart.  More than I wanted to spend, but they should last. Feet need to be looked after.

As we were there we took a walk to the prom and promenaded thereon! Briefly I must add, as the wind was tugging at his new hat!! 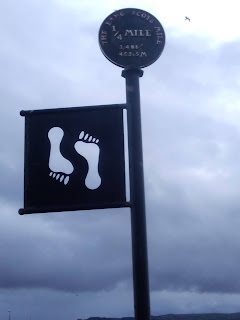 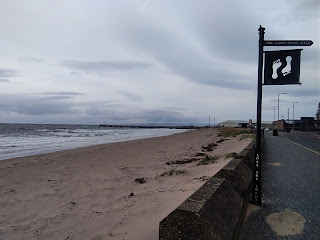 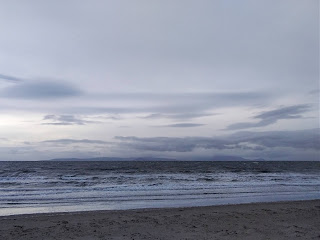 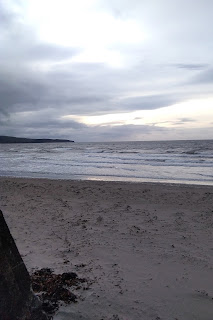 I am glad that we had a walk yesterday, as the wind is blowing up harder today and tomorrow. I don't think that we will get the snow that the Highlands and East may get.

We had a short wander after posting, near Mauchline by the River Ayr, starting by the Barskimming bridge. Originally built in the 1600s I think, then improved in the mid 1700s.

It was only after getting home that we realised that the huge heap of bricks had been a three storey mill, rebuilt after a fire in the late 1800s. It was the biggest water driven corn mill in Ayrshire. By this century it was derelict, after use by a metal supply company..there are photos of it in 2010 and 2013 looking very sad...it appears to have been demolished sometime between 2018 and 2020 and the site out up for sale for redevelopment. 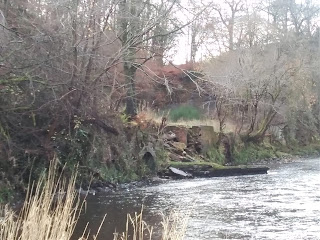 You see the arch? The three storeys were above that. 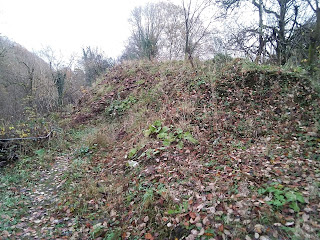 The heap of bricks. 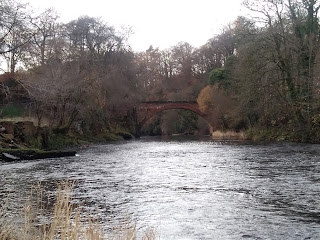 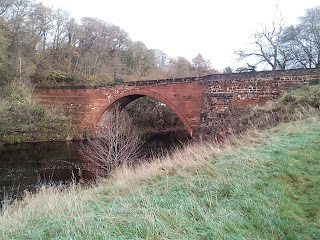 The bridge from upstream then downstream. We walked a little way upstream almost to where the Lugar joins the Ayr, but deep as it is the floods had been a good six foot deeper and the path was partly washed away and partly overgrown. 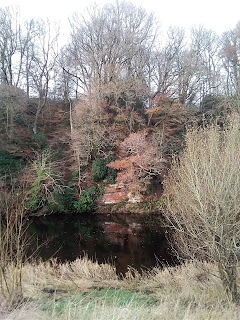 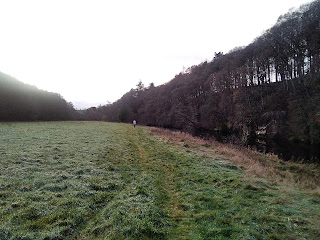 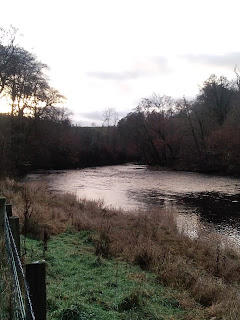 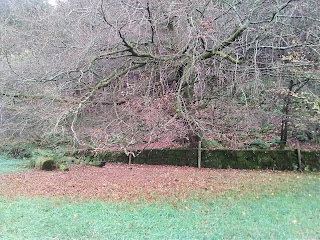 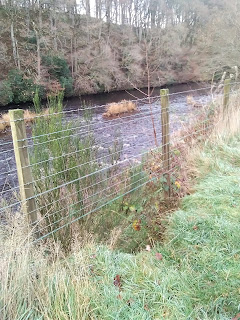 There was a path on the river side of the fence....rather a washout unfortunately.

I might be able to find a little more about the mill...but how a grade two listed building can disappear.....very sad. 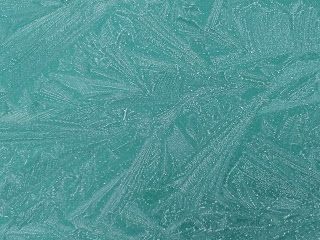 The frost has arrived.

But not enough to stop us going to Dumfries for the Upland's Winter art and craft fair.

Held in the grand hall on the Crichton campus, it was definitely not standing on a piece of carpet to keep your feet warm and blowing on mitted fingers!! Great to see top class work well displayed and catch up with friends.

We pushed the boat out too...lunch in the Bistro there...very nice indeed.

The other gallery we wanted to see was shut...but that did mean we were home before dark. 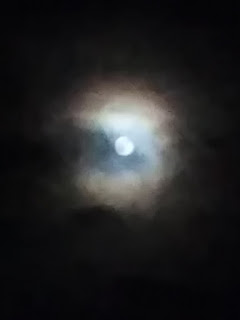 A cold clear night, but in the morning.... 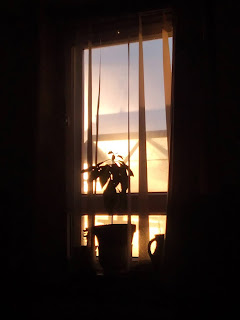 A good start to the week, with a sale to post out , a friend to see in Mauchline and clutter very slowly reducing.

Anyone having problems with this button on the Reading list of blogs one follows?

I like to check back when I have left a comment, to see if that has a reply....

Load More isn't working for me..

And now its back!!

A day of getting things straight.

More washing and keeping. Time  to haul things out of my wardrobe and question their existence there! It shouldn't be difficult to find items or to put them in their place.

I have one wardrobe and coats in the boiler cupboard.  I still feel that I have too much!!

Fleabay has come back into action...one sale, which is nice, a few revisions and offers sent. The sale is packed ready to send tomorrow.

Pirate is thinking of selling his Snapon and Cornwell tools after the one went so quickly on fleabay...and at a good price too.  After all he isn't going to do spannering on airplanes any time soon!!

I am envious of my friends at the other side of the Globe, having a view of the Beaver Moon eclipse. Even if it hadn't been at daylight time here, we seem to be getting cloudy nights just when we could be seeing the heavens at their most active!!

The merest whisper of a meteor shower is enough to bring on the clouds and rain!!

Pirate's saying is "home again, home again, two fat pigs" .....not sure where that originated!!

We had a good journey, starting at 8am, a little later than planned, but we had no rush hour jams around Bristol, thankfully, and managed to time it well everywhere!

There is still so much traffic on the roads..yes, we were part of it...but how many could really say that their journey was 100% neccessary? According to my brother he has heard that some companies that were functioning perfectly...and sometimes better...with staff working from home, have insisted that staff return to office working.

Home working doesn't suit everyone, but it did reduce road traffic.

It is good to see people returning to public transport use too, but this is again something that needs to be encouraged both in use and provision and ease of use too. Many times just coordination of timetables would help!!

Anyhow, we had a good journey, limiting motorway use to between Bridgewater and Chepstow and near Lymm up to Gretna.  We prefer normal roads where we can stop where we choose and vary our food stops!!

Pirate had never travelled up the Wye Valley past Tintern so that was a real bonus for him. He misses regular driving, but at 82 that is now too stressful..for both of us! He is good as my relief driver though and is enjoying seeing sights that as a driver concentrating on the road , he never saw. His job is navigation and telling me about what he can see. That is good practice for him , so all good!!

Our three weeks away have been mostly dry, with reports from home of wind and rain.

We had got used to later dusk as well, but by the time we stopped at Tebay at 5pm it was truly dark and as we came home to Scotland the rain started!

Since we have been home it has been damp, chilly and windy.. 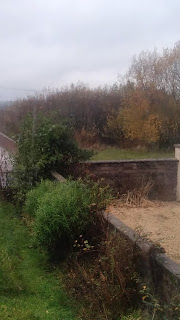 After a good time away, getting back into routine is a let down.  Still, we are getting there. One wash done, milk defrosted and a batch of yoghurt started. Most of the clothes kept, and post sorted...mainly bills and bumf!!

Next there is a list of Things to be Done...

Get the back door open...looks as if a couple of screws have come loose in the locking mechanism.

Start up the fleabay shop again.

Work out what is needed to increase the loft insulation.

There is more, but that is plenty to start with!!