It rained again, so we got busy, Pirate on his new bike build..going steadily...and after collecting a new (to me)chest of drawers I got most of my knitting and sewing into them.
I say most...there are still three boxes of cloth stash and mending on top..and a jumper waiting to be finished on top of a dresser!
Then it was the turn of the study, as my friend who runs the secondhand emporium had managed to find a book press for me...and £30 less than I had feared I would have to pay.
Still not cheap...but I am looking forward to printing with less strain on my hands. 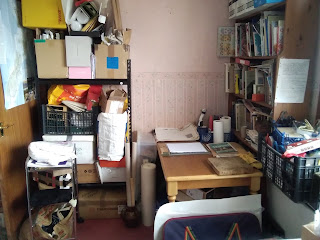 Still everything stacked up but more organised and two useable tables.
Then as the bats flew outside, a plane flew into Prestwick Airport, and the sun set, and I could catch a glimpse of Goat Fell on Aran between the houses. 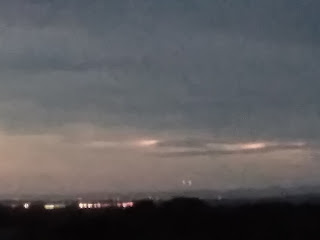 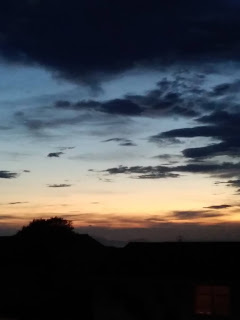 I had intended to bake today...as it was , it was home style fast food all day! Lunch came from garden, freezer and larder and supper from garden,salad,  eggs from a neighbour and cooked potatoes. No point in making extra work.
Posted by gz at 23:04

The press is so pleasing!

would like to have a neighbour with fresh eggs:) who knows when we move, maybe we will. I think simple food is the best, too much time spent in the kitchen is not my idea of fun! Pleased for you that you now own a press, that is probably something very hard to come by.

Definitely a busy day, even if not quite what you'd envisioned!