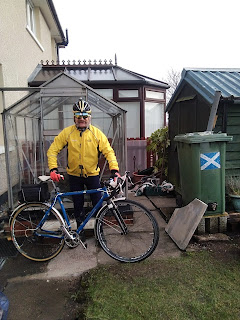 Pirate went out on his bike yesterday to test run a new gear cassette. He was dressed up like an onion...but after one lap of our five mile circuit he was back!

It was far too cold and windy to be safe....but it was a successful ride as the wheel worked.

We have a few indoor plants, which are mainly Pirate's concern....and they are thriving!

The fig is a cutting from the walled garden near Abergavenny, given to me by my late friend Big Pete...it has had a few setbacks but it is looking good.

The one on the left is an Aubergine...or Eggplant...it took two months to germinate....and flowered late...and one flower was pollenated, resulting in a two inch long fruit!

I took pity on it before the frosts set in as the flowers are beautiful, and the plant is still going. 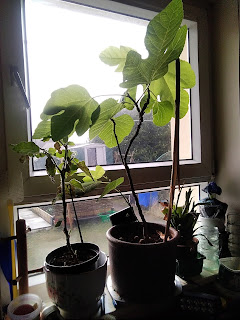 They will be out in the new greenhouse in the spring..and the fig may even get out in a sheltered spot in the fresh air!
Next step, sort out the seed store and clear more windowsills!!
From being minus 10 C we are heading for plus 10....but with galeforce winds and heavy rain showers it doesn't feel like that.  Not so windy as  in the Western Isles.... thankfully!
Posted by gz at 10:02

Looking forward to getting out on the bike again. I've been stuck in for various reasons and sticking to the exercise bike for ages, now. It does mean I can watch films, etc. while I'm doing it but it will be great to get out again - even if the weather's less that good!

Lovely plants in your window...I'm sure glad they are inside! As were you that cold day!

The huge transfer of temperature from positively glacial to pealing off several layers of clothing was a relief - but that wind just blew threw the kitchen garden and flattened the obelisks - so today was a day of repair and replace. Still - it is lovely when seeds pop up - gives you that lovely 'growing' feeling :)

I love your fig cutting! Our fig -- now planted in the garden -- seems to have survived the recent freeze, but of course we're a long way south of you.

The figs look good, they must like that spot.