more of the Seven Days 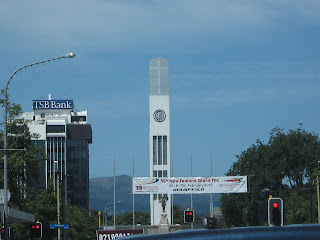 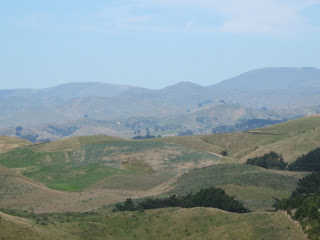 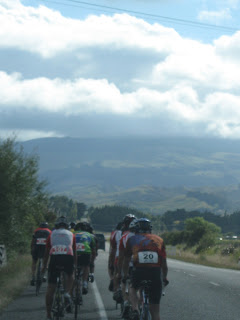 We left Palmerston again in sunshine and headed North....but then turned away from the Pohangina Valley , crossing the Oroua River to Highway 54.
We saw wind turbines on the Ruahine Range. 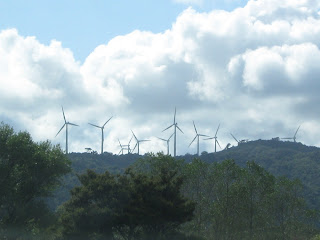 On our way we were passed, mostly politely, but not all by patient car and lorry drivers...some a little less patient.... 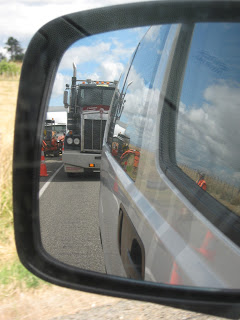 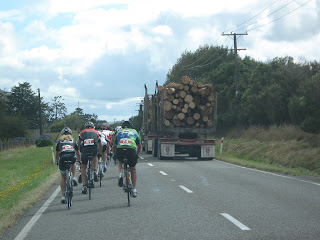 Some drivers waited until it was safe and clear, like this lorry with a double load of logs....others didn't.     The worst during the week was when a lorry had patiently waited until a passing lane to pass a bunch of riders...and a car overtook the lorry, on the wrong side of the road on a blind bend.....
The service vans, some carrying spare wheels, drive with hazard lights on, most with an amber warning light on top, plus signs about the race.  Their job is to protect the riders and inform other road users.  We also had motorbike outriders to help in this task and act as links when there was no radio or phone coverage.

Onwards to lunch at Hunterville via Vinegar Hill. 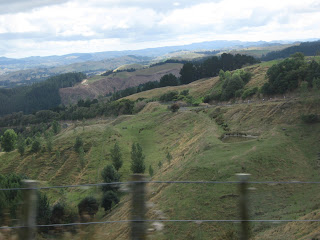 Our riders had food prepared and we found our coffee and lunch in Cranks Cafe on the intersection there- with a Motorbike and bike Museum!

After lunch, another hot 61 k ride to Wanganui and a sleep at home for us.

Here's the Pirate...you don't get pictures of  his front from the service van!! 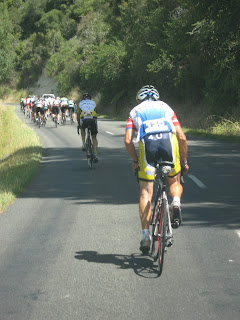 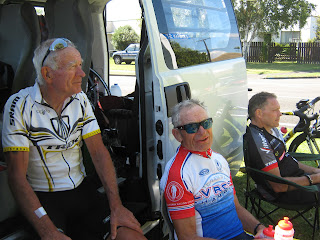 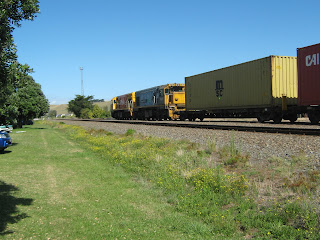 This is by the stage finish in Whanganui East. The race vehicles are parked off the road under the trees to the left....and there is the railway, now unfortunately just a goods line, but still there.
No fences, no lamps and cctv...and on the crossings you just have a sign, and the onus is on YOU to look for the trains.

The next day (Wednesday) we started from the velodrome in Cooks Gardens in Whanganui, crossed the river and followed it up the highway, 50 k onwards past Aberfeldy Country school to lunch at Kakatahi country school.
This is the view from the playing field. 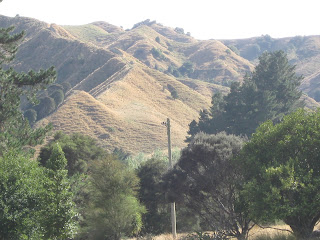 There are at present five pupils there and it is hanging on in there. Four more start this week and there is a good chance of more soon.    You can see that it is quality school with good work done, but some parents don't get on with the teacher...so that is a few children taken to the next school down the valley...others see the numbers going down, and they also send their children past the school to the next one in case it closes....    This is happening all over the world I guess, in rural and not so rural areas.
The school is almost 100 years old and the parents sold lunch and drinks, raffled a 100 dollar note (the winner gave it to the school) and the sponsors of the race, BDO accountants, also ran another raffle with the proceeds going to the school.

I was driving another van for this day and the next, so when they took to the mountain road to Okahune, I carried on up the "Para paras" (I think?) following the Whanganui valley, up switchbacks and zig-zags along the State Highway 4.  Right at Raetihi and then a short way to Okahune. 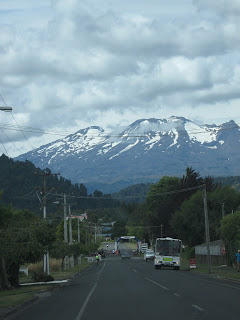 This is the view as they finished, with Mount Ruapehu in the background.

It is a lovely small town, and the designers have had fun.... 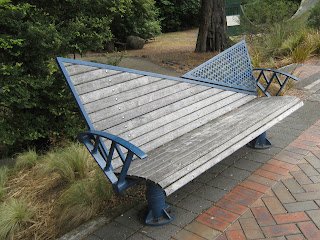 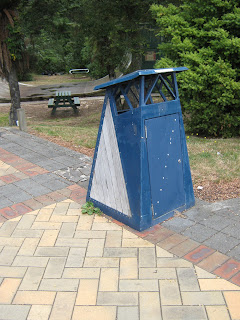 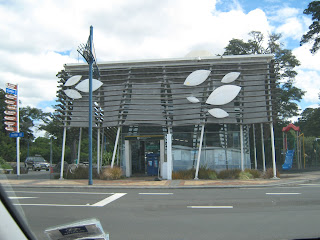 The next day in my baggage van I went to the East of the volcanoes, on the road to lunch at Turangi.    I didn't want to get in the way of the race and it was a good way to see countryside that I might not have a chance to again.
Ruapehu from the East. 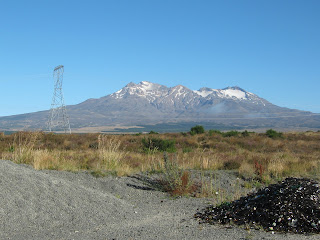 Then a little further North, from the left,  Ngauruhoe, then Tongarino who erupted a little in November last year. 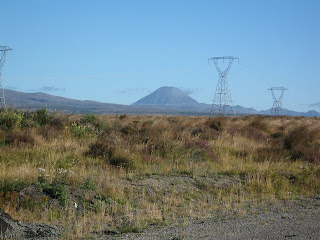 The angle and distance over the ashfield (used as Mount Doom for the Lord of the Rings film) makes the latter two appear small...but they are 2287 and 1967 metres high....when this map was published!!
This little one to the South of Turangi,  Pihanga, is only (!) 1325 metres.... 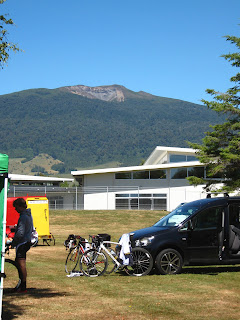 Off to Taupo after lunch, just under 50k, but on the State Highway and with some very big hills in it.
Being St Valentine's Day, our host in Whanganui picked some garden flowers (sorry, lady gardener!!) and brought them over the finish line between his teeth to present them to his wife!!  I think he is forgiven for forgetting their wedding anniversary! 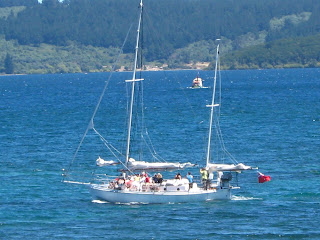 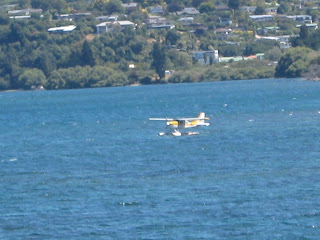 The last two days I was driving our van as a service van as our driver (and hostess) had to return to her mother's 70th birthday party.   Unfortunately= I had to do it alone as they were short of helpers, so I was busy driving instead of helping and photographing.
All our riders were doing well, so at least that was a relief.
The stage from Taupo to Te Awamutu was the only single stage day, and was long and hard, but at least the wind cooled things a little.  Then a transfer to Hamilton, where we stayed in a friend's house...bliss!
The last two stages on the last day were short but hard, first mainly flat through the coal mining town of Huntly with a "sting in the tail" up to the village hal in Glen Murray.  Then short and fast and hard, descending , crossing the Waikato River and climbing to Pukekohe and the finish.

Our  Host rode well in his group, our other rider was 4th in the 60 + age group, and The Pirate was second in his 70+ group. 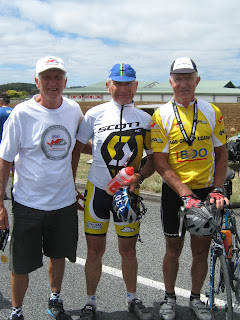 Race Organizer Stephen Cox, himself still a good rider, The Pirate, and the 70+ winner, Brian Trafford of Auckland who has only been riding since he was 60!!.

The week flew by, and we've all seen a great amount of this beautiful country...although some of us didn't have time to see much!!