Both pottering a bit after a long day yesterday, but still getting things done, if slowly!

The weekend's washing dried beautifully on the line in the garden, the sun warm and the breeze doing its work.

Plants were potted on and space readied for their next move.

Mid afternoon we braved the traffic to Ayr in order to buy an Irish style or frog mouthed shovel for Pirate's son's birthday present...he wants to do more in his garden, but has back problems.

This should solve that, as the long handle avoids bending down!

A quick baking session to make supper, nothing fancy... rhubarb and apple crumble, a Brazil nut, chick pea and vege savoury (a small one to share tonight, the other to be portioned and frozen ) and some smaller potatoes baked.

While I did that, Pirate took on the job of watering and feeding the garden..a bigger job than he had guessed!

Then football....for him.  Even Scotland Vs England leaves me disinterested!!

I spotted the sunset instead.... 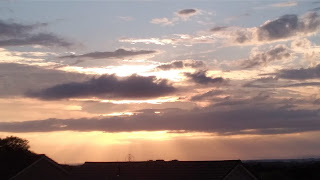 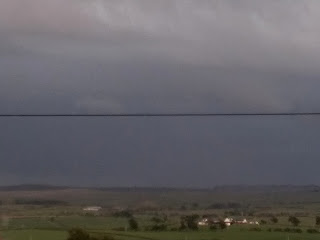 That inertia that is everywhere seems to be hanging over us...is it holding us still, waiting for Monday morning's Solstice?

Those with a interest in these things note that Mercury is retrograde until the 22nd...

Feeling the inertia as well

I did a search for frog mouthed shovel and came up with a shovel mouthed frog. For real.


You had me at "rhubarb and apple crumble"! Sounds delicious. I rarely see rhubarb at the grocery store. My mum had a huge patch of the stuff in our garden at home, and frequently dessert was stewed rhubarb with custard. Your crumble sounds even better!

Not sure about soccer these days, I find rugby more interesting.


Being Irish,I had to look up that Irish style shovel. A lethal looking instrument that I don't ever remember seeing at home! Looks like it would simplify any digging job though, and then you can slake your thirst by popping your Guinness open with it! Win, win!

I am with you on the football disinterest! I'm going to have to look up a frog-mouth shovel, because I can't quite visualize that.

My apologies for elbowing my way on to your blog without any justification. Although, come to think of it, I could expatiate far and free about inertia.

You were kind enough to comment on my use of a Welsh welcome as headline to a recent post to Tone Deaf. It's clear you know the language. Could you please go just a little further?

At age 80 (in 2016) I started to take individual singing lessons and have done so ever since. Mostly lieder and operatic arias. However I have a favourite warm-up song which I have used since Day One. Best known as All Through the Night though I would much prefer to sing it as Ar Hyd y Nos since this is the preferred version of the pros, and especially Bryn Terfel.

So far I've tried to sing along with various Welsh versions but this is not an ideal system. What I need is a phoneticised version of the Welsh words; not using the acadamic phonetic symbols which I would have to learn from scratch, rather an anglicised pronunciation of the Welsh. Do you know of such? If not, pretty please, could you fashion such a transcription?

I have just glanced at your previous post, Light, and I realise we have something in common. In Neandertal Times (ie 1959 - 60) I worked as a journalist on Cycling, now known as Cycling Weekly. If it helps I can boast of having shaken hands with Reg Harris, Tom Simpson, Brian Robinson and Eileen Sheridan. Well before your time, of course, but no doubt you have a historical perspective of the sport.

If you want to reply via your blog I'll keep an eye open. If you'd prefer to email me use:

I should add I actually did ride a bike too. YHA touring mainly. Bradford to London in two days on one occasion, though there was one harder ride.

That should be "formally".

Greetings Robbie..I am definitely a third generation "trackie" and fourth generation cyclist..I met Reg Harris when I was 4 at Richmond Grass track meeting...and at Leicester, Saffron Lane at the championships twenty years later! I didn't start racing until 1965.
I will think about Ar Hyd y Nos...that's a challenge!

Apart from the necessary holes when putting in new plants I do not dig in the garden, ever, anywhere. Just add copious amounts of mulch whenever the weather obliges and the mood takes me; makes for far better soil quality in the end (and less weeding).

Have a gander at Charles Dowding, the "father" of the no-dig movement if you/your son is interested. x

It would be lovely to get a bit of unsticking movement soon, Monday would be nice.

Off to look up a frog mouth shovel...

I too looked up frog mouthed shovel and got cartoons. We must see pictures!